Brutalism is an easy movement to hate on aesthetic grounds. Its bare concrete buildings can stand out in a uniform sandstone city like Edinburgh. The lack of decoration on its block-like structure has fallen out of fashion since the 1970s. Prince Charles even famously qualified a brutalist proposal as a “monstrous carbuncle”. But in order to fully appreciate and understand the style, it is important to understand the moral and historical implication of such movement. Edinburgh has a great legacy of brutalist architecture, offering us a wide range of examples, such as social housing blocks, university buildings or office constructions.

Some of the recurrent criticisms expressed towards brutalism are the lack of interest to architectural precedent or the surrounding area. Built right underneath Edinburgh’s castle, Argyle House has been called an “eyesore” or “charmless” and been threatened to be demolished several times. However, it is one of the prime examples of Scottish brutalism and thus holds historic significance. In addition, perhaps the simple bare geometry of the building highlights the most brutal building of the city, Edinburgh’s Castle.

As the Cockburn’s assistant director commented “Previous generations thought that the Georgian Barracks on Edinburgh Castle were a monstrosity and that Victorian architecture was vulgar – we don’t need to repeat their mistakes.” Destroying Argyle House would erase a part of the city’s history.

It is not to say that brutalist architects didn’t make mistakes but as local architect Malcom Fraser advocates, a conversion of the building, instead of a replacement, would allow the architecture of yesterday to meet today’s needs. Argyle house faces the risk of having the same fate as the New St Andrew house in St James Centre, demolished for a £850 million project, currently under construction.

At the end of world war II, Europe faced an economic recession forcing a large part of the population into poverty. The British government undertook significant social reforms, such as the creation of the NHS, to combat misery. Building mass housing was a rational solution to clear out slums and improve health conditions in British cities.

In Edinburgh, Leith was famous for its Victorian slums, in which overcrowded streets were deemed “unfit for human habitation”. So in 1963, the council responded with the creation of a 10-storey slab block of flats called the Cables Wynd House. The architects for the project Alison & Hutchison & Partners were highly inspired by the work of Le Corbusier in Marseille, and his Unité d’Habitation.

Using external access decks to recreate a sense of community already existing in the neighbourhood, the designers were socially driven and furnished their building with modern heating and appliances. The building has a North-South orientation, to prioritise natural light into the apartments.

The repetition in the façade is broken thanks to a slight change in the axis towards the middle of the block, giving the building its popular name, the “banana flats”.

The word brutalism comes from the French for raw concrete, Béton Brut, and refers to the bare finish of the concrete exteriors. This deliberate plainness allowed for buildings to be built with prefabricated elements which sped up the construction process. Therefore, the style became very popular for governmental buildings and civic projects, like the Cables Wynd House.

Scottish cities built numerous ambitious projects in the post war period in the brutalist style. Slum clearance in the south of Glasgow led to the construction of many housing blocks. But the style lend itself to all programs, even religious buildings, like St Peter’s Seminary, in Cardross, listed today as a “building of world significance”. See more about it here.

Overall only 42 post-war buildings in Scotland are listed today at Category A, the highest level of protection for a building of “special architectural or historic interest”. Historic Scotland grant this low number to the fact that brutalist buildings “do not have the merit of age and frequently do not have an aesthetic value that is immediately obvious”. 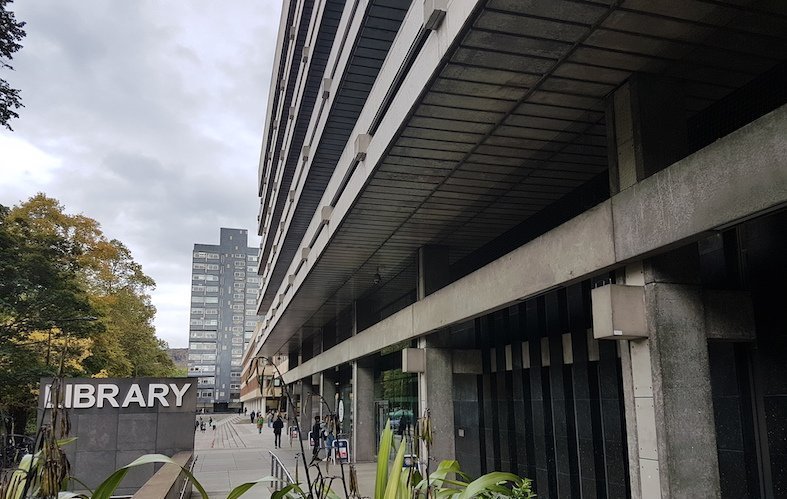 The most successful brutalist building in Edinburgh

Perhaps the best example in Edinburgh of a successful brutalist building is the University of Edinburgh’s Main Library. When the architect Sir Basil Spence was commissioned to design the new university library, which was to become the heart of the University’s future developments, he adopted a very functional approach, whilst still caring for the aesthetics of his building. For example, the horizontal members on the facades projecting through the porticos not only balance the proportions of the building, but they also block out natural light on the first floor.

Because of site restriction and height regulations, the building has a footprint of one acre, but its presence is elegantly balanced thanks to façade composition. For instance, the suppression of vertical elements on the upper store make the building appear slimmer. When it was completed in 1964, it was the largest university library of the UK. Today the building has only received minor changes and is still highly functional.

Thankfully the most ambitious brutalist plan for Edinburgh never got built. The Abercrombie Plan was a masterplan designed in 1949 by Patrick Abercrombie and Derek Plumstead. Their proposal aimed to solve the traffic problem in Edinburgh by having a motorway go through the city and uniform the whole of Prince’s street in a uniform brutalist style. Thanks to the city’s conservative heritage, and its numerous pressure groups, the majority of the Abercrombie plan was abandoned.

Brutalism was a social and architectural revolution. In Edinburgh, the style struggles to merge into a city so unified by its material, but its dynamic and rich built history lends itself to preserving examples of all periods of architecture. Brutalism’s ideas of functionality and egalitarians should not be forgotten along with the destruction of its buildings.

Browse our other articles about Edinburgh’s architecture here on our blog.