For nearly half a millennium Edinburgh Castle’s David’ Tower lay built over and only got rediscovered a century ago. It is usually closed to visitors, but on a special tour organised by Historic Scotland events team the entry was permitted to a group of enthusiasts.

Built in 1380s and named after its builder King David the II, the tower was a defensive structure, as well as part of Royal residence (as the Holyrood palace did not exist yet). 30m in height, it was the most prominent feature of medieval Edinburgh architectural skyline. This royal towerhouse influenced how the nobility built their own castles, which developed into Scotland’s own baronial style architecture widely used in Edinburgh 16-17th centuries, and revived again as Victorian Scottish Baronial. Architecture of this style featuring crowsteps and bartisans is wide spread in Edinburgh Old Town. 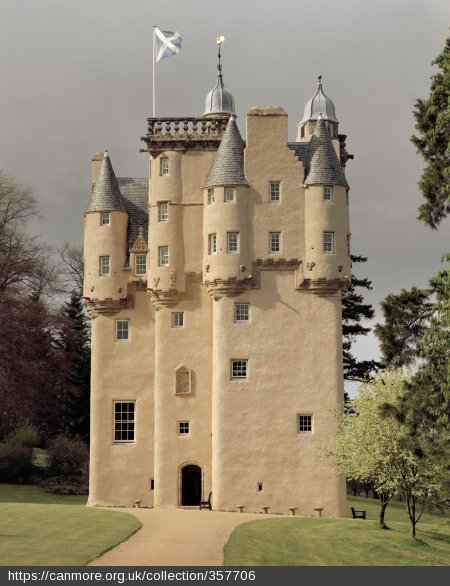 The towers, being tall structures, were helpful to shoot arrows, or poor hot oil on the enemy. They were a popular element of medieval castles at the time when the main method of attack was to try and get over the gates somehow. But towers became vulnerable with advancement of canons, which would attack from distance. This is how David’s Tower met its demise. The tower was destroyed during the Laing Siege of 1573. Canon balls stuck within the walls were discovered during excavations. However, the bottom part of the tower remained intact and is now within the Half-Moon battery wall. 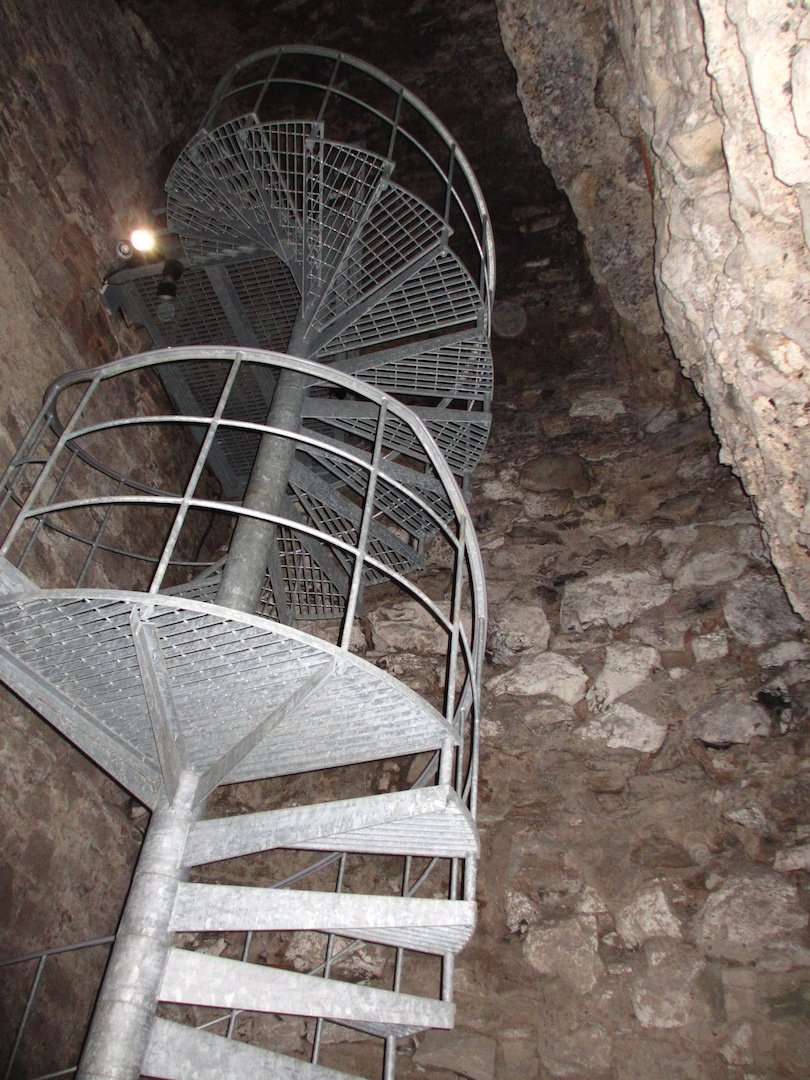 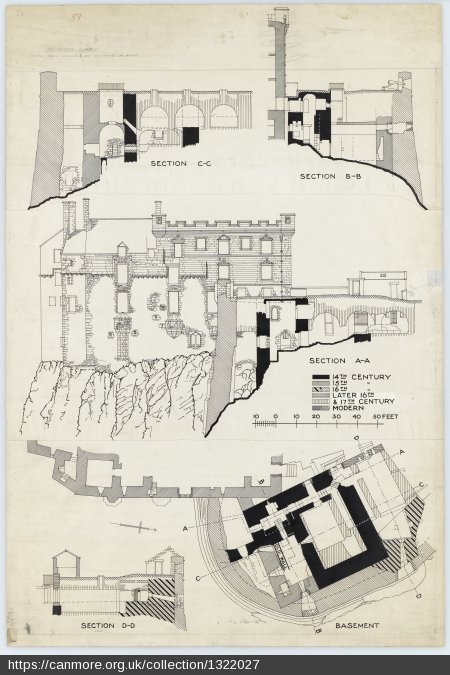 The Tour – Inside David’s Tower

This was the area we got to descend into. Edinburgh Castle’s conservation architect lead the group of history buffs to the vaults and dungeons that are what remains of David’s’ tower. After a detailed architectural introduction, we all put on safety helmets and vests, lit the torches and followed our guide into the vaults. Felt like a real adventure!

One of the chambers used to hold hidden crown jewels under the latrine. What could be a better disguise, especially because so few people new of the towers existence altogether! The tour culminated by descending into deep void within the tower lined with a dovecot, an ingredient of any proper castle! New access structures made it possible for small groups like ours to see the tower.

I used the opportunity to ask what I always wanted to know – if there really were tunnels leading from the castle and under the royal mile. The architect said he did not know of any, but maybe he is just not allowed to say… 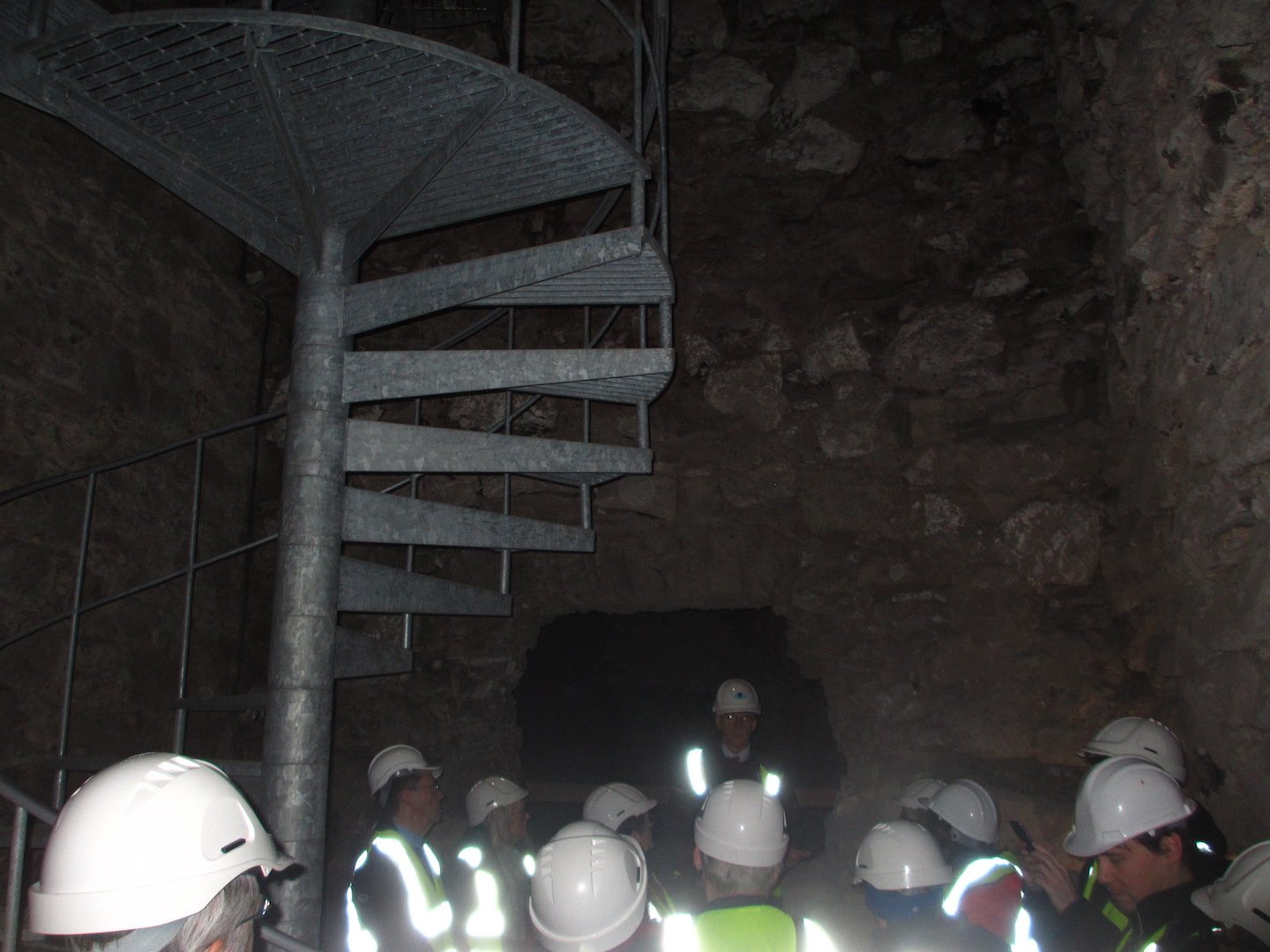 The missing tower became the centre of interest of architectural community of 19th century, who even held a competition for its reconstruction design. The nostalgia was largely sparkled (among many other things) by the writing of Walter Scott.

A year after the death of Prince Albert, David Bryce, a Scottish architect designed a proposal for a memorial in his honour. The 164 feet tall tower was to be located in the centre of the castle, changing Edinburgh’s skyline dramatically.

However, Queen Victoria herself disapproved of the scheme putting an end to the project, which remained a fantasy. Instead, the Albert Memorial took the form of a more modest sculpture in Charlotte Square in the New Town.

If built it would have been colossal. Architectural drawings of various notable entries were preserved and are now exhibited at the castle.

The Future of David’s Tower

Castle conservationists are working on new excavations as it is likely that there are more towers buried underneath new structures.

When asked if rebuilding of the tower was in the vision for the castle, architect said “no, we do not know what it really looked like, so would not be genuine.” Indeed, not much is known about the actual architecture of the tower. We only get hints about what it may have looked like from the paintings or inventory records.

If you are intrigued with how Edinburgh Old Town changed throughout the centuries, take an audio tour of Edinburgh’s Old Town.

You will also hear about lost buildings that shaped Edinburgh’s history and skyline, such as the Tolbooth and Netherbow Port.