Many ways to cross the Forth

The river Forth boasts an awe-inspiring set of bridges. All built with a different structural approach, they bring many an engineer for a tour.

City of Edinburgh lies on Firth of Forth’s southern coast. From 11thCentury the sites of port towns of South Queensferry and North Queensferry were considered most suitable for connecting the county of Fife on the north coast with Lothian and Edinburgh on the south. At that time Margaret, queen consort of King Malcolm III, established first ferry service to transport religious pilgrims from Edinburgh to Dunfermline Abbey and St. Andrews.

The Forth Railway Bridge

By the 18thCentury that ferry line was believed to be the busiest in all of Scotland. Due to increasing numbers of passengers plans of alternative crossing of the Firth of Forth were developed, however it was the evolving of the railway system that stressed the need for a bridge. Thomas Bouch, a young engineer, designed a system of trains floating over the water on platforms. This project was suspended as – the original botch job –  his Tay Bridge near Dundee collapsed in storm.

A new design for the Forth Bridge, was presented by John Fowler and Benjamin Barker in 1881. The structure was engineered by Sir William Arrol, who also worked on the replacement Tay Bridge, the London Tower Bridge and the Bankside power station, which is now Tate Modern. A busy and proud engineer indeed – at the time of its completion in 1890s Forth Bridge was world’s biggest bridge (measuring 2467 m) and first major steel structure.

The structure’s famous red colour came at quite some effort and has even inspired a saying to describe a never-ending task – “like painting the Forth Bridge”. Thankfully, longer lasting paints were invented after some 100 years of such labour.

It’s sheer mass never fails to impress, as it was purposefully over-engineered to inspire new confidence after the Tay bridge collapse. This true marvel of Victorian engineering was listed as a World Heritage site by UNESCO in 2015.  The best way to fully appreciate and admire it is to take a train to Fife. That will enable to you to get a closer look on the structural details the bridge is noted for.

The Forth Road Bridge

Suspension bridge is a structure where the deck is hung below the suspension cables. The cables are suspended between towers and anchored at each end of a bridge. Additional suspender cables are installed from main cable, which carry the deck below.

The Forth Road Bridge became category A listed structure in March 2001. It is open for cyclists and pedestrians as well and can provides really nice views to the other bridges. 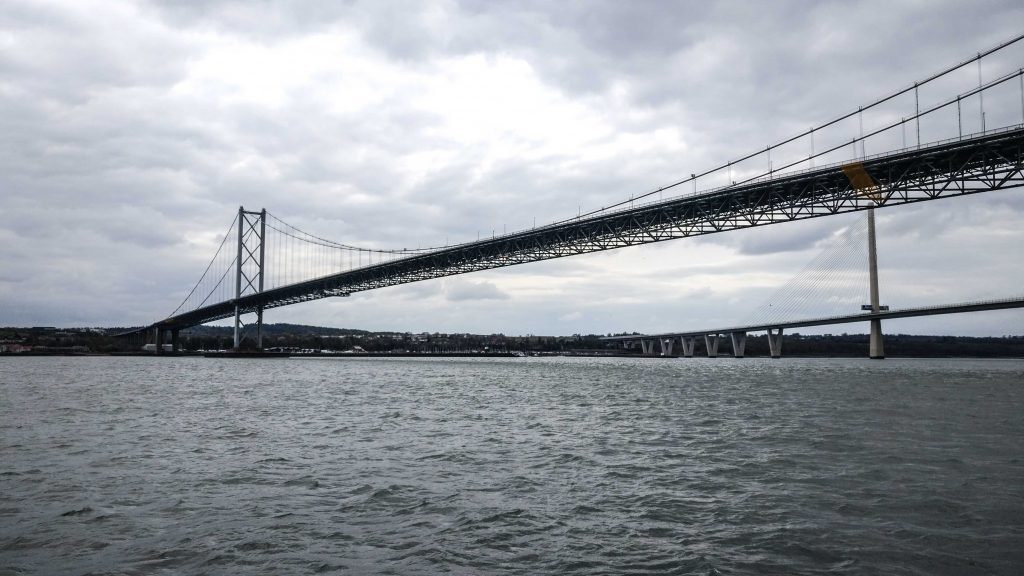 The towers of the Forth Road Bridge had to be strengthened due to increased weight of traffic in 1990s. Loss of strength in main suspension cables prompted proposals for a second road bridge.

Queensferry Crossing was built alongside both of the existing bridges over Firth of Forth and opened in 2017.  It is by far Scotland’s largest infrastructure project, and at 2700m in length, is the longest three tower, cable-stayed bridge in the world.

Cable-stayed bridge is a structure with one or more towers from which cables support the bridge deck. Its distinctive feature are cables running directly from tower to the deck and are thus forming fan-like pattern. 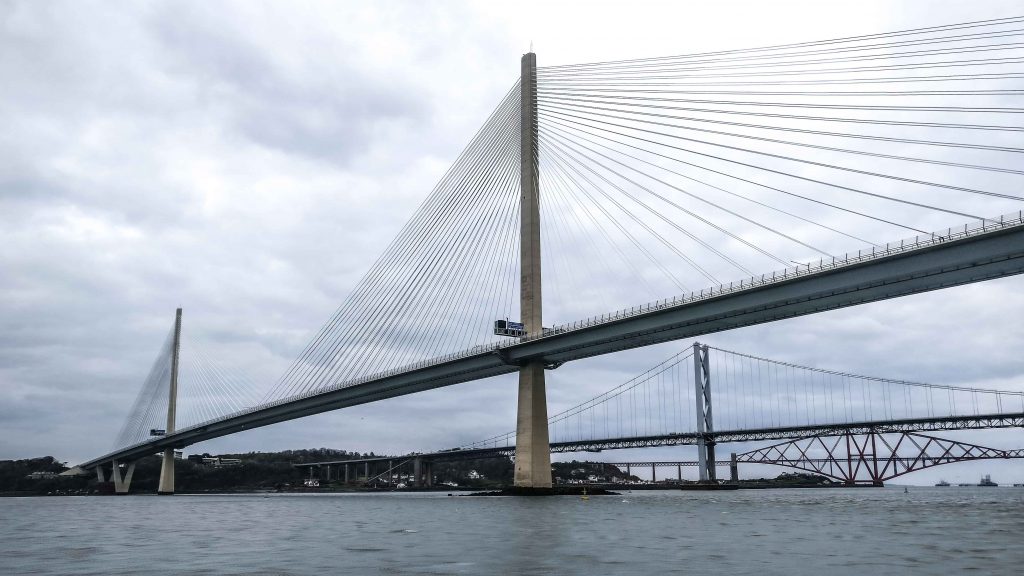 The Forth Road Bridge

The North Queensferry village is one of the nicest spots for photographing the bridges. They appear in the medium shot, while the city of Edinburgh serves as a breath-taking background. Hopetoun House and its grounds in South Queensferry offer different perspective on the famous bridge landscape. It is also worth visiting the estate on its own, as it is one of Edinburgh’s historic jewels.

Or you can follow our footsteps and jump on a short cruise!

Due to Edinburgh’s topography, the impressive bridge collection extends beyond these three newest bridges. The North Bridge, South Bridge and Dean Bridge are considered as the most noted bridges in Edinburgh. If you would like to hear how they influenced development of life and city of Edinburgh you might be interested in an audio tour of Old Town, or Dean Village.

Forth Railway Bridge: I never knew this about Scotland” by Christopher Winn.

PrevPreviousFife and Dundee:
from Scots cottages to starchitecture
NextTo Replicate or to Readapt?Next
View Audio Tours